Intricate detailing, labyrinthine patterns and tangled lines, the cut out trend for this season has just achieved a whole advanced level of elaborate. From linear grids to organic swirls, designers from Valentino to Bora Aksu are removing and cutting tiny shapes from plain fabrics, allowing the entangled lines left to generate a garment of intensity and detail. The garments tend to be otherwise plain, and of simple styles, allowing the delicate forms to take utter control of contrarily subtle designs. 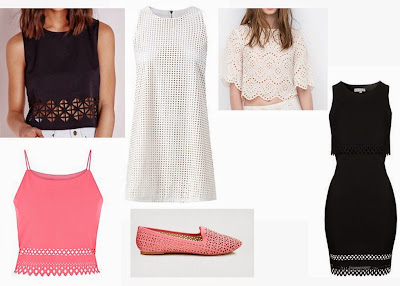 Cut outs on the highstreet are predictably a bundle more subtle (boring) than those which graced the runways for the SS15 shows. Most are sticking to just removing shapes from the hem of the garment, whilst some slightly more courageous are in fact covering the whole garment, yet keeping the forms monotonously repetitive and simple. Highstreet stores are being less brave and a lot more minimal. Never-the-less the clothing above is, although rather trivial, perfect for participating with bold prints, such as floral and geometric patterns. Their monochrome colour tone makes them perect for teaming with bright or varied colours too!

Will you be sporting the intricate cut out trend for SS15?
Posted by Unknown at 17:20